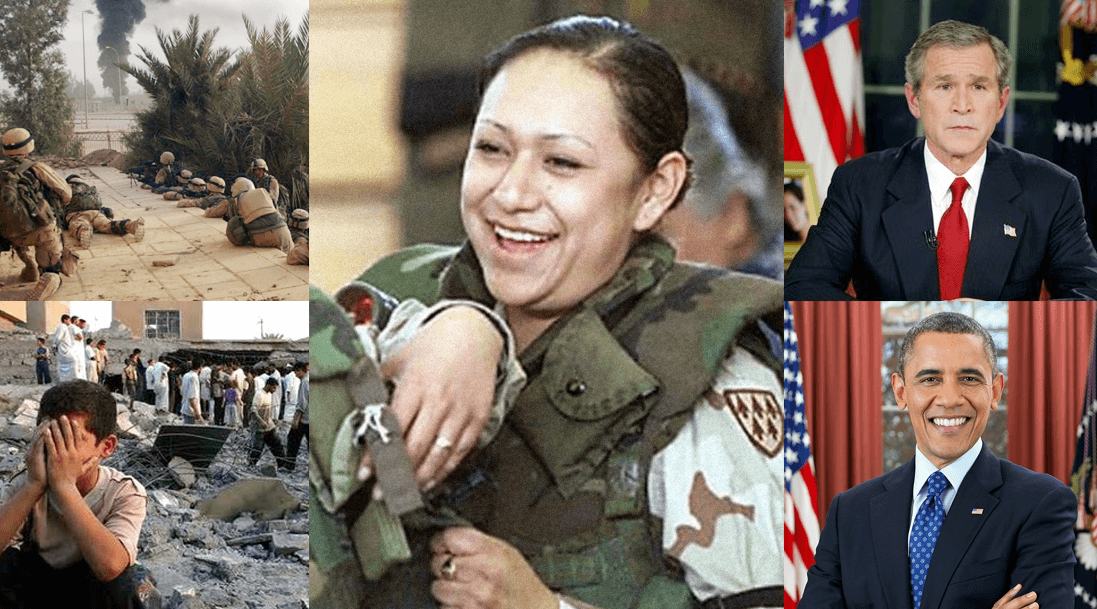 The public policy strategy to use public relations campaigns to convince the American People that the country of Iraq had Weapons of Mass Destruction was a major initiative by President Bush as the rationale to invade Iraq. It was determined that such weapons threatened the National Security of the United States and must be destroyed with deployed United States Troops and military weapons.

The United States Secretary of State made available unsubstantiated documents to the United Nations in which the United States security agencies had verified that Weapons of Mass Destruction existed inside the borders of Iraq and could be deployed against the United States and therefore were a threat to the National Security to the country.

President Obama continued the occupation of Iraq under the same verification initiatives. Many United States soldiers have been killed or wounded within that military occupation during both the Bush and Obama administrations.

The reality is that there never were any Weapons of Mass Destruction inside Iraq and there existed no threat to the National Security of the United States. The White House, Military, Central Intelligence Agency, United States Congress, the United Nations, international sovereign countries and a willing national/international media became a part of an unprovoked Iraq invasion. The information has been available to all countries, organizations and media that the Weapons of Mass Destruction did not exist.

As President of the United States, I relied on information which was unverified identifying weapons of mass destruction within the boundaries of the sovereign country of Iraq. My decision to invade that country was an international illegal act and resulted in the human death and destruction of Iraq, the death and wounded of many U.S. soldiers and the illegal transfer of U.S. Treasury taxpayer funds for the invasion.

I hereby apologize to each individual soldier who I put in harm’s way and to the American People for resulting loss of your young children and the misuse of your hard-earned taxpayer contributions to the U.S. government.

I now pledge to accept the responsibility and to make amends with U.S. soldier reparations and insuring, to the American People, that all future information will be verified before any such military action is authorized by the Whitehouse and the President.

Costs to the United States troops

There were 4,408 United States Troops killed in the Iraq invasion and 31,922 wounded. The reason these young men and women were attacking Iraq was because of a mismanaged United States Intelligence community and a media campaign on Weapons of Mass Destruction to validate the use of deadly force. The first apology must go the PFC Lori Piestewa (photo center of collage above), a member of the Hopi Indian Tribe, who was the first lethal casualty in the Iraq Invasion.

There would be another 4,407 more lethal casualties and each require a necessary apology from the United States Presidents for mismanaging a military campaign based on unverified propagandized information alleging existence of Weapons of Mass Destruction and a Threat to United States National Security, both of which proved to be untrue.

Costs to the United States citizens

Children of the many parents whose sons and daughters enlisted in a military invasion operation paid the ultimate price with their lives and with their physical destruction as wounded Troops. The families deserve a direct apology from both President Bush and Obama.

The money spent on the military operations invading Iraq is estimated to be over one trillion dollars of taxpayer money. This cost added to the overall cost of a barrel of oil significantly for the individual United States citizen while reducing costs to United States allies as they depended on the U.S. Military to share the majority burden of the invasion costs.

The families lost their children to this illegal war, greeted wounded children and watched the housing crisis take their children’s home in foreclosure. They were left with the health care costs as the Iraq Veterans returned to their hometowns. Joblessness and homelessness awaited the returning veteran.

In the Pledge Allegiance to The Flag of the United States it says within that pledge, ‘With Freedom and Justice for All’. This is where President Bush and Obama must step forward in the call for integrity and national acknowledgement of wrongs done by the administration to the individual Troops. They went into battle with the full intent to uphold the story told to them by the administration that there were Weapons of Mass Destruction and a threat to United States National Security and therefore, your life must be sacrificed in order to protect the United States people from potential Iraq attack.

Sending United States Troops into Harm’s Way without verification of any such threats is a despicable act and much more when it comes from a United States President. When this act results in harm to the United States Soldiers, it must be respected from a grateful nation and that begins with a National Apology from the Commanders in Chief causing such a regretful act: President Bush and Obama.

The Apology: A regretful and unlawful act requiring young men and women obligated to lethal military operations against Iraq forces based on a mistake by the Presidents, Bush and Obama, is hereby delivered to the families of the deceased and wounded United States Military soldiers. It was a major mistake made by the Office of President of the United States and acknowledgement of this mistake is hereby accepted.

The individual soldier lost their time for at least a year and some lost their jobs and health care coverage. These soldiers went into their country military service based on protecting their countries national security, just as their President stated and their Secretary of State verified. Both used manufactured and false information. It was not Necessary for these young men and women to give up their lives for this invasion which was also not Necessary.

The United States Congress can redress some of this pain by creating legislation for the Reparation for Soldiers in the Iraq conflict: House Resolution ‘A Grateful Nation’

The United States Congress responsibility to pay for soldiers ordered into Harm’s Way as a result of a national government misrepresenting threats to the United States and occupying Iraq in an unprovoked invasion.

A National Congressional Hearing is necessary to obtain the facts which lead to a major invasion and occupation of Iraq. All facts and testimony documented to expose the weakness in the system of governmental decision making: Authority/Budget Allocations/Military Deadly force.

The United States is near bankruptcy as it uses essential financial resources adhering to a hegemony foreign policy.  The greatest risk to the National Security of the United States of America is the financial mismanagement of the national financial institutions, the destruction of democracy through permitting corporations to create a ‘Merchandised Consumer Democracy’ and eroding the 4th Estate or a Free Press by unconstitutional spying and eliminating the constitutional right of the people to be secure in their persons, houses, papers, and effects, against unreasonable searches and seizures, shall not be violated. Solving the original causes of international conflict rests with healing a predatory colonization of many countries by the United States and other western states and destroying many of their resources through toxic environmental extraction processes while exporting these economic values into occidental corporations and then leaving a toxic polluted land and a non-sustainable economy. Placing soldiers in harm’s way to secure economic returns for a plutocracy in the United States is an unreasonable expenditure of their lives.