An appeal from Helga Aguayo and Sara Rich 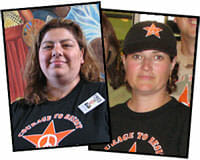 If you feel anything like we do, you are beyond frustrated by years of war that appear endless. Presidential candidates, Democrats and Republicans alike, are offering little hope that this nightmare of unjust occupation and war will be over anytime soon. It appears that it really is up to us, “the people,” to stop this war.

We have all done our share of marching for peace, and of course we’ll be marching tomorrow October 27th as well. Regional demonstrations to end the Iraq War are happening in Boston, Chicago, LA, SF, New Orleans, NYC, Orlando, Philly, Salt Lake City, Seattle, and Jonesborough. However, there are those who have put much more on the line.

Tens of thousands of service members have resisted illegal war and occupation in a number of different ways—by going AWOL, seeking conscientious objector status and/or a discharge, asserting the right to speak out against injustice from within the military, and for some, publicly refusing to fight.

You’re the backbone of our efforts to help stop this war by supporting the troops that are resisting—and we’re counting on you to help us do so. We want to share a few highlights of recent efforts, and offer a preview of unfolding initiatives.

Some people still dismiss war resisters as cowards—and that is still hard for us to hear as we remember what it took for our loved ones to say “enough is enough.” For many resisters, first-hand experiences in Iraq compelled them to take a stand. For others, “doing the right thing” and acting on conscience simply began to outweigh their military training in obedience.

“Courage,” declares Iraq War resister and GI Rights Hotline counselor Pablo Paredes, “is so often assumed of the cowardly and so seldom acknowledged in the brave. The good people at Courage to Resist and their work are the antidote to that troublesome state of affairs. More importantly, they are the inspiration for those who are currently being asked by history to find that unsung courage—the courage to resist.”

With your help, in the next few weeks we will be:

As two of the newest members of Courage to Resist, we are getting a better idea of what it takes to do this work every day. Most importantly, we have learned that we can’t do it without your support. Please send your gift of $30, $50, $100 or more today. It’s your tax deductible gift of whatever you can afford that is critical to our efforts through this Fall and Winter in support of the troops who are refusing to fight.

On behalf of Courage to Resist, 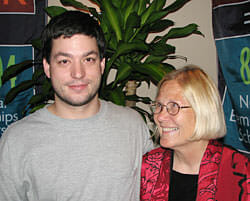 I felt like I would be fighting the entire military by myself. If I had known about Courage to Resist earlier, I would not have waited so long to speak out. They highlight the real face of the war by allowing those of us that have been a part of this insanity to share our experiences and voice our concerns. Courage to Resist deserves your respect and support. My journey has just begun.