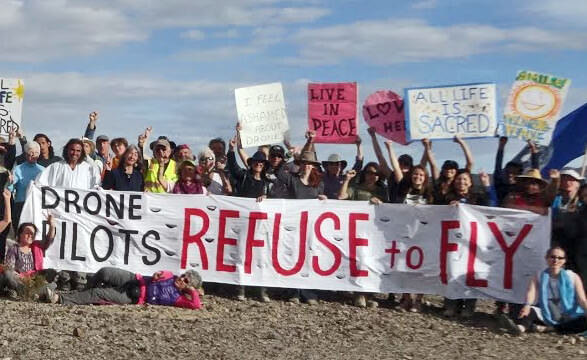 In the last two years we had nearly 150 activists each year join us from 20 different states across the country, including dozens of veterans. Both years, in multiple and successful resistance actions, we were able to nonviolently interrupt business as usual, with dozens who risked arrest and were arrested to stand in strong opposition to the illegal U.S. “targeted killing” program.  Let’s make SHUT DOWN CREECH 2017 an even more powerful stance against the brutality of drone killing. Please join us, and help spread the word. Support people, who aren’t able to risk arrest, are equally needed.  Come one, come all. Together we are PEACE!

Why we protest at Creech:

In 2005, Creech Air Force Base secretly became the first U.S. base in the country to carry out illegal, remotely controlled assassinations using the MQ-1 Predator drones, and in 2006, the more advanced Reaper drones were added to its arsenal. Creech drone personnel sit behind computers in the desert north of Las Vegas and kill “suspects” thousands of miles away. Recent independent research indicates that the identity of only one out of 28 victims of U.S. drone strikes is known beforehand. Though officials deny it, the majority killed by drones are civilians.

In 2014, it was leaked that the CIA’s criminal drone assassination program, officially a separate operation from the Air Force’s, has been piloted all along by Creech’s super-secret Squadron 17. In November 2015, four Air Force drone veterans who were based at Creech wrote to President Obama, “We came to the realization that the innocent civilians we were killing only fueled the feelings of hatred that ignited terrorism and groups like ISIS, while also serving as a fundamental recruitment tool similar to Guantanamo Bay. This administration and its predecessors have built a drone program that is one of the most devastating driving forces for terrorism and destabilization around the world.”

Since 2009 dozens of activists have been arrested for allegedly trespassing at Creech, why attempting to peacefully interrupt the indiscriminate killing and burning of innocent people by drones.

The US drone program is rapidly proliferating as air bases are being converted to drone bases across the U.S. and abroad, but Creech remains the primary air base in U.S. state-sponsored global terrorism. Creech is where the killer drone program started–it is where we shall end it.