20+ arrested at week-long protest at Creech Air Force Base 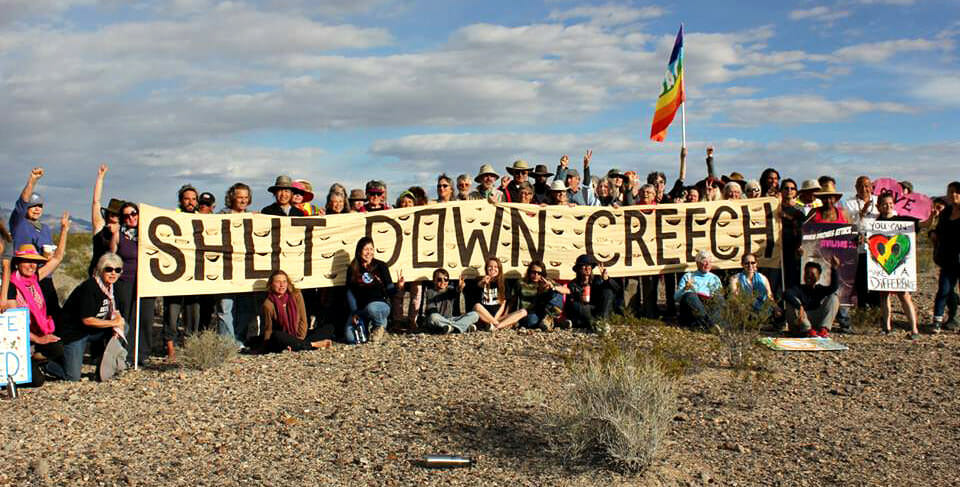 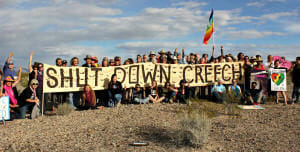 At Creech Air Force Base, Indian Springs, Nevada, activists from over 20 states joined together for a national mobilization of nonviolent resistance to shut down killer drone operations in Afghanistan, Pakistan, Yemen, Somalia, and everywhere. Throughout the March 27-April 2 protest over 20 people were arrested participating in several different actions.

At one of the base gates, a group of protestors dressed as angels created a mock-funeral, protesting the drone practice known as the “double tap”, where the US deliberately targets and kills mourners at the funeral of drone-strike victims.

The double-tap is also known to target first responders of drone strikes, the people there merely to help the injured.

At another gate, a silent meditation vigil for peace was held, Popular Resistance reports. 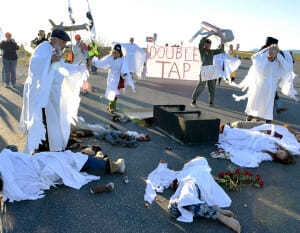 In 2005, Creech Air Force Base secretly became the first US base in the country to carry out illegal, remotely controlled assassinations using the M Q-1 Predator drones, and in 2006, the more advanced Reaper drones were added to its arsenal.

Creech drone personnel sit behind computers in the desert north of Las Vegas and kill “suspects” thousands of miles away. Recent independent research indicates that the identity of only one out of 28 victims of U.S. drone strikes is known beforehand. Though officials deny it, the majority of those killed by drones are civilians.

“We are acting in solidarity with whistleblowers and current drone warriors who have suffered moral injury from their work at Creech, yet who are unable to take this kind of direct action without severe consequences, and on behalf of victims of drone war crimes,” said activist Renee Espeland to IndyBay.

The event was proudly endorsed by Courage to Resist and sponsored by CODEPINK: Women for Peace, Nevada Desert Experience, Veterans For Peace, Voices for Creative Nonviolence and others, and received media attention from local press, and Democracy Now.